We reported last month that the Scottish Government utilised its devolved powers in its most recent budget to make further changes to income tax rates in Scotland, and as a result there are now significant differences between the rates of income tax paid in Scotland and the rest of the UK.

Changes to be introduced by the Scottish Government for the 2018-19 tax year include:

Based on these changes the income tax rates and bands in Scotland and the rest of the UK with effect from 6th April 2018 (the start of the new tax year) will be as follows: 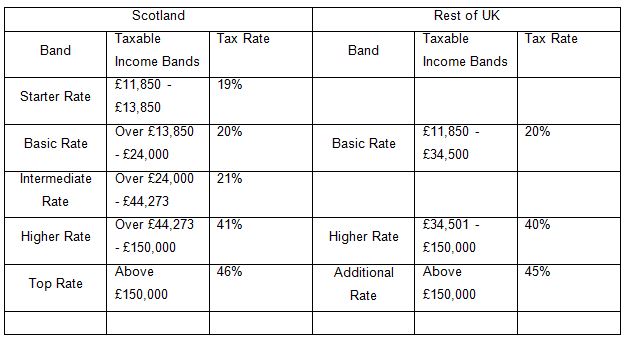 There are also differences in the amount of tax payable on property transactions in Scotland and the rest of the UK.

In Scotland, this tax is known as Land and Buildings Transaction Tax (LBTT), which was introduced as a replacement for Stamp Duty Land Tax (SDLT) in April 2015. The rest of the UK has retained SDLT.

In its latest budget, the Scottish Government announced its intention to set a new zero rate threshold for first time buyers of £175,000. The residential and non-residential rates and bands for LBTT are to remain unchanged.

With effect from 6th April 2018, the situation for residential property transactions will therefore be as follows:

Both Scotland and the rest of the UK impose a further tax on the purchase of any additional properties that aren’t direct replacements for the main residence.

In Scotland, this is known as the Additional Dwelling Supplement, and amounts to 3% of the total purchase price of an additional residential property purchase of £40,000 or more. Where applicable, it is payable in addition to the LBTT that would be due on the purchase.

In the rest of the UK, purchasers will also have to pay 3% on top of the normal SDLT rates when buying properties additional to the main residence.

At Murray Beith Murray, we are more than just tax practitioners - we are trusted advisors. We are dedicated to helping our clients solve problems and preserve their wealth. Our highly personal service reflects our culture, which is centred on integrity, trust and expertise, and the guidance we provide has been designed to be an investment, not an expense. For more information, please contact us today.