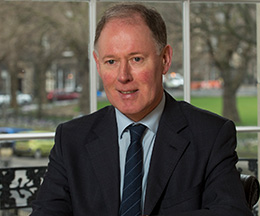 Drew is a graduate in Physics (Glasgow University) and Law (Aberdeen University).  Before studying law, he worked onshore and offshore in the oil industry.

His legal traineeship and first employment as a qualified Solicitor was with Paull & Williamsons in Aberdeen where he worked for several years.

He then rose to partner at McGrigor Donald in Glasgow.  After a number of years he relocated to Edinburgh as head of litigation in Fyfe Ireland WS then Fyfe Ireland LLP.  He joined Tods Murray LLP as a partner in early 2012.  Latterly, he was a consultant at Shepherd & Wedderburn before moving to Murray Beith Murray.

He is a trained mediator.  He has acted as legal clerk to Scotland’s top arbitrators and has represented clients in arbitrations and adjudications as well as in numerous litigations in the Sheriff Courts and when instructing counsel in the Court of Session and Supreme Court.